Cytomark have validated TransFix for use with EDTA anticoagulant for lymphocyte phenotyping, however there are publications documenting the successful use of other anticoagulants such as heparin. Below are 2 examples of clinical trials where TransFix has been added to blood collected in heparin tubes:

TransFix with Lithium Heparin for Basophil Analysis in Asthma

Laviolette et al. collected blood in lithium-heparin tubes in their clinical trial. TransFix was then added to stabilize and preserve samples during shipping to a central testing facility.

The Authors evaluated the safety of benralizumab in adults with eosinophilic asthma and its effects on eosinophil counts in airway mucosal/submucosal biopsy specimens, sputum, bone marrow, and peripheral blood. One of the exploratory objectives in multicentre phase I study included evaluation of basophil in PB: Blood was collected in lithium-heparin and 0.4 mL of TransFix was added to stabilize and preserve cells for subsequent flow cytometric analysis. After shipping to a central testing facility (within 14 days) co-expression of IgE high-affinity receptor (FcεRI) and CCR3 with CD123 and chemoattractant receptor of type 2 helper T cells (CRTH2) were collectively consulted to identify the basophil population.

TransFix with Heparin for Lymphocyte Analysis in Coeliac Disease

Olivares et al. collected blood samples in sodium heparin tubes then added TransFix, showing compatibility of TransFix with other anticoagulants in the context of a clinical trial.

This 3-month double-blind, randomised, placebo-controlled intervention trial studied children with newly diagnosed coeliac disease following a gluten-free diet. The aim was  to evaluate the effects of B. longum CECT 7347 administration on immune and anthropometric parameters, and on intestinal microbiota composition. For lymphocyte phenotyping, peripheral blood samples were collected in heparin tubes mixed with TransFix and sent immediately to IATA-CSIC at room temperature for cytometry analysis (CD45, CD3, HLA-DR,CD4, Foxp3, CD8).

For more examples of publications referencing the use of TransFix, visit our bibliography section! 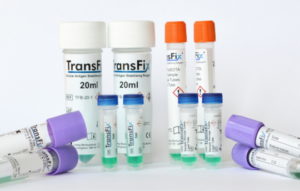 TransFix is available without anticoagulant, either in bulk format to add to the sample, or in pre-filled sample storage tubes to which the sample can be added.