Like with human whole blood specimens, animal whole blood degrades over time rendering it unsuitable for examination. Researchers have found that the addition of TransFix to animal blood samples has extended the integrity of the samples in several species.

TransFix is used to stabilise avian blood samples in order to batch and ship prior to analysis.  The automated analysis of total white blood cell count and white blood cell differentials is routine in research and clinical diagnosis in mammalian species. In avian haematology these parameters are still estimated by conventional microscopic procedures due to technical difficulties associated with the morphological peculiarities of avian erythrocytes and thrombocytes. Both cell types are nucleated and fairly resistant to cell lysis, a prerequisite for automated leucocyte quantification and differentiation by commercial instruments. By using an anti-CD45 monoclonal antibody in combination with selected subset specific markers we established a simple (no-lyse no-wash single-step one-tube) flow cytometry based technique for high precision chicken blood cell quantification.

The avian Metapneumovirus (Ampv) causes an economically important acute respiratory disease in turkeys. While antibodies were shown to be insufficient for protection against aMPV-infection, the role of T-lymphocytes in the control aMPV-infection is not clear. In this study, the role of T-lymphocytes in aMPV-pathogenesis in a T-Cell suppression model in turkeys was investigated. Blood samples were collected with a syringe and were immediately transferred to S-Monovette EDTA-tubes. A total volume of 400ul EDTA-treated blood was mixed with 80ul fixation reagent TransFix, resulting in a 1.2-FOLD dilution of the sample. Samples were then batched and stored until analysis could take place.

Cytomark has not independently verified any of the findings presented here and we recommend that the end user conducts internal validation of the product.

A protocol for the stabilisation and flow cytometric analysis of whole blood samples for chicken and duck can be found here. 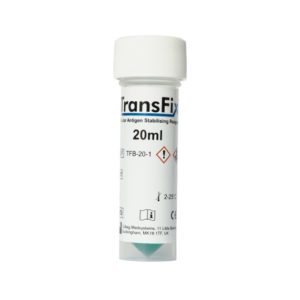 TransFix Bulk is provided in 20ml bottles or in 1ml aliquot sizes in packs of 1, 10 and 50 tubes. This gives the end user most flexibility with regard to application of TransFix to research samples.